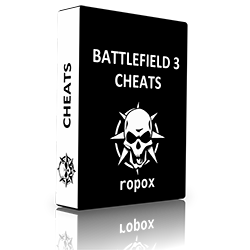 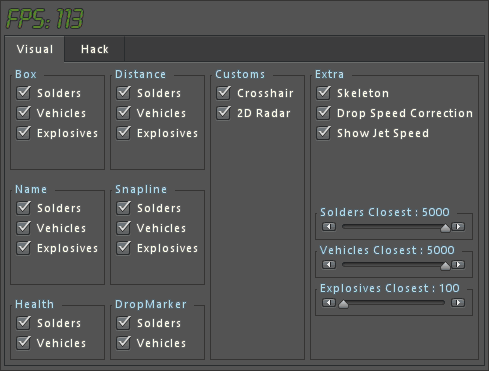 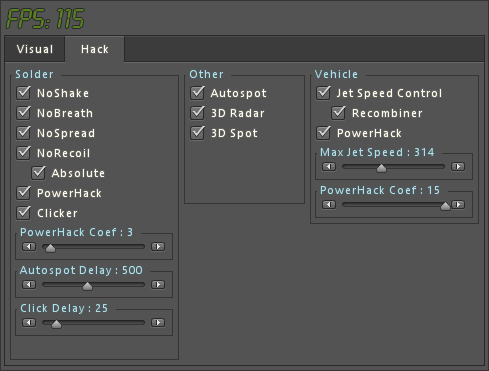 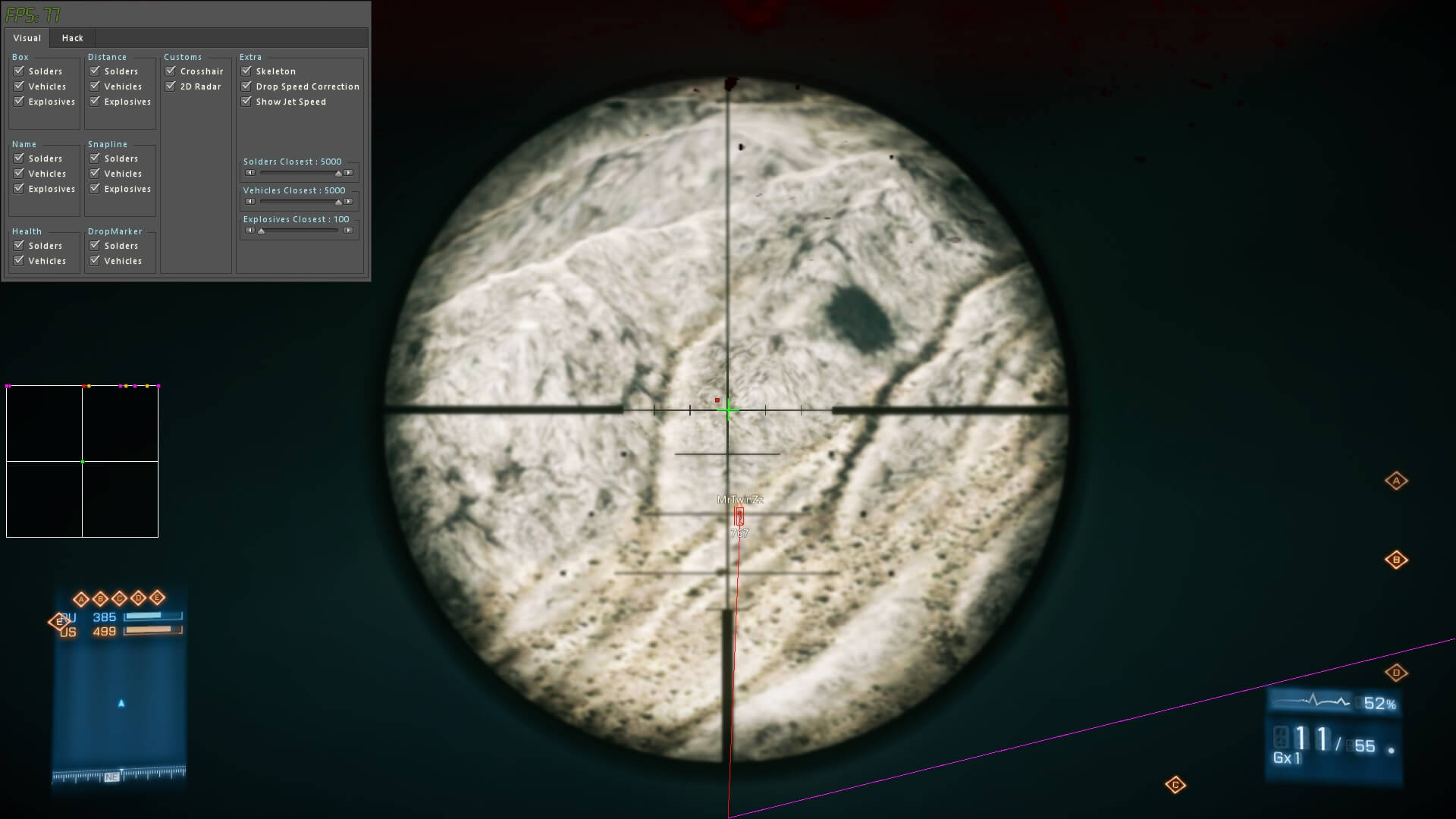 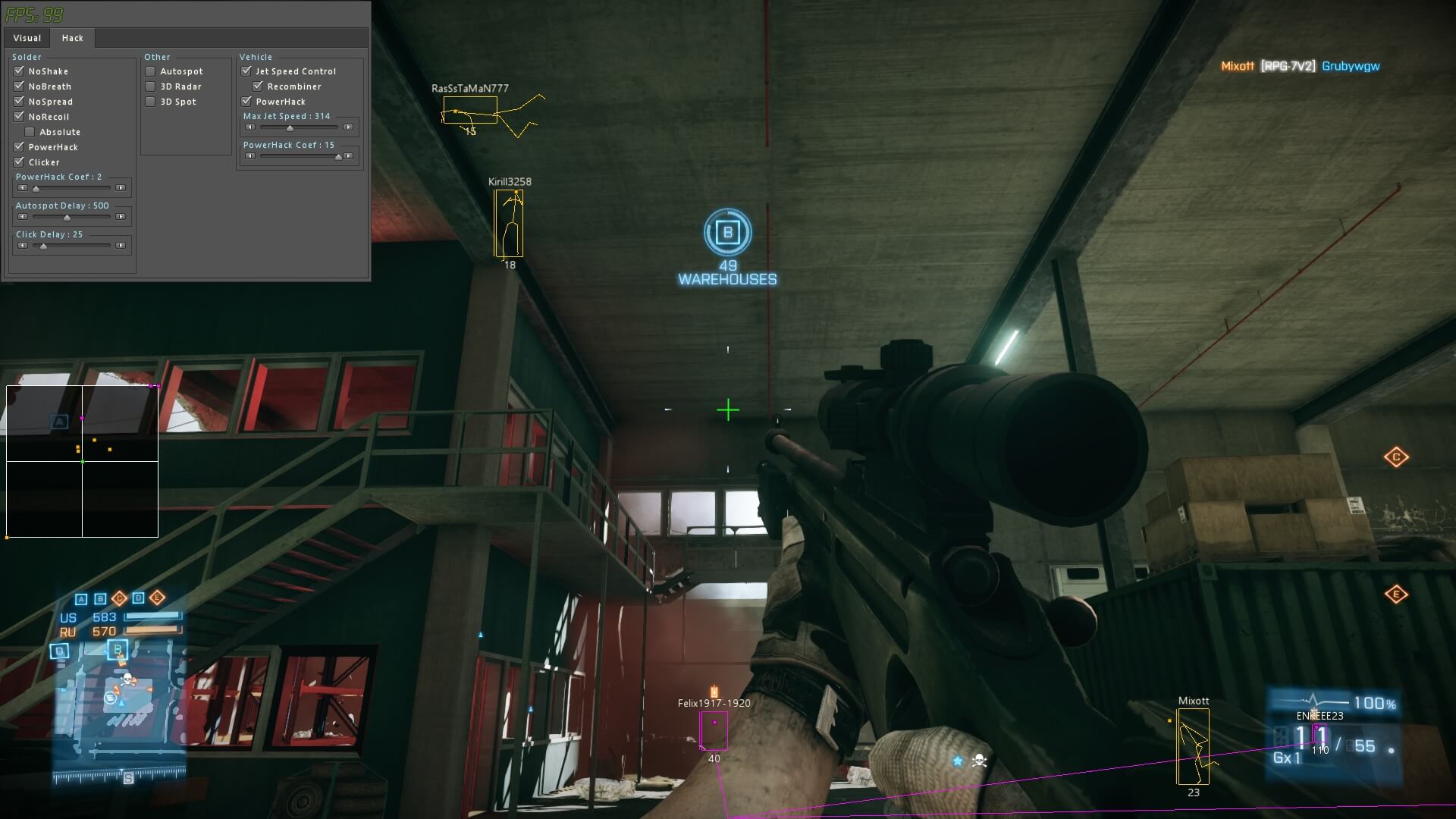 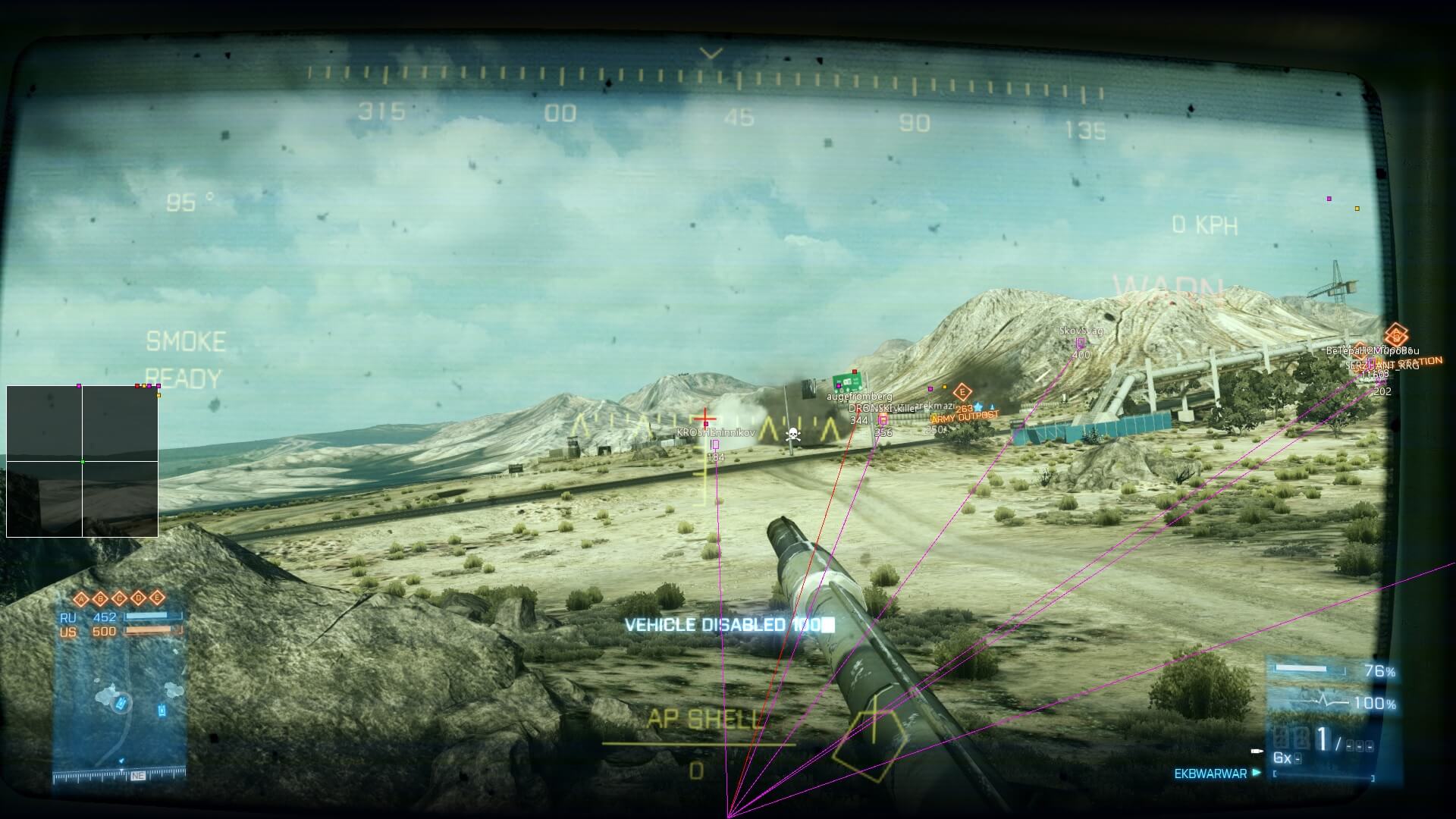 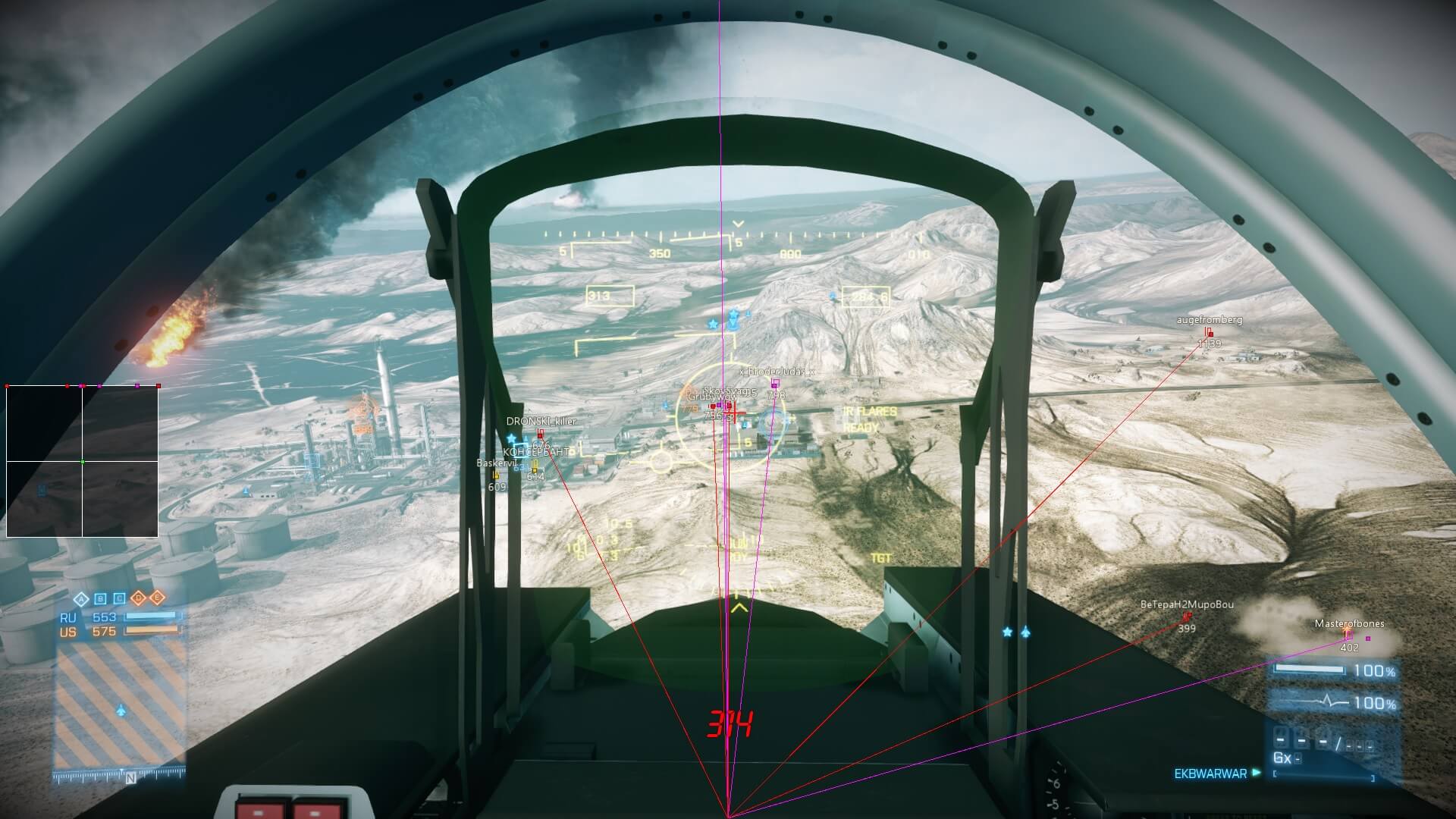 Loyalty discount! If the total amount of your purchases from the seller ropoxcheats more than:
If you want to know your discount rate, please provide your email:

ropoxcheats information about the seller and his items
offlineAsk a question

100% The safest private cheat on the market for batelfield 3 from ropox.
Perfectly suitable for players who do not want to sweat and zadrotit BF3, and play at a level and even better zadrotov. What can be more pleasant after hard work or studying, playing battelfield 3, to control the situation on the battlefield.
Our customers receive an individual cheat, which reduces the level of mass ban.

Checked time! No product since 2012 has been banned by anti-cheat systems.

Functions of reading BF3:
-ESP Box Draws a frame around soldiers and equipment, marks the charges in a circle.
-ESP Distance Displays the real distance to soldiers, equipment, charges.
-ESP Name Displays the names of soldiers, soldiers in technology, the name of charges.
-ESP Snapline Draws a line from the bottom center of the screen to soldiers, equipment, charges.
-ESP Health Displays the current health of soldiers, equipment.
-DropMarker Draws a point, adjusted for the distance to soldiers, equipment. You do not need to bother with the calculation of the distance, shoot the marker and hit.
-DropMarker Speed ​​Correction Enables / disables the speed calculation for DropMarker. Preemption.
-Crosshair The crosshair in the center of the screen, on the technology automatically adjusts to the shot zone.
-2DRadar Own radar, which displays enemies.
-Skeleton The skeleton of the enemy is drawn, it is convenient to determine in close proximity in which direction the enemy is looking.
-Show Jet Speed ​​Displays the real speed of the aircraft, it only works if the Jet Speed ​​Control option is enabled.
-Solders Closest Set the maximum distance from which the ESP associated with the infantry will be displayed.
-Vehicles Closest Set the maximum distance from which the ESP associated with the equipment will be displayed.
-Explosives Closest Set the maximum distance from which the ESP associated with the charges will be displayed.
-NoShake Removes shaking when firing.
-NoBreath Stabilizes the sniper scope in one position, making it possible not to hold your breath for aiming.
-NoSpread Reduces the spread of bullets.
-NoRecoil Removes feedback.
-Absolute If this add-on is turned on, the recoil compensator is applied to the weapon with automatic fire mode, which makes it possible to hit targets at the "clip".
-PowerHack It´s BPS, Increases the power of the bullet, is adjusted with the PowerHack Coef slider.
-PowerHack Coef PowerHack regulator, For shotguns, the recommended value is not more than 10, for the rest of the weapon 2, if you want to have fun, and are not afraid to get a ban on statistics in Metabans and similar, then we expose as much as you like. the value 1 turns off the PowerHack function. Works only against the infantry, that is, it applies only to bullets, all hand weapons, and all machine guns on technology.
-Clicker Quickly press LMB on semi-automatic barrels and pistols.
-Click Delay Delays between LMC clicks, by default 25, you can increase or decrease this value by fitting it to fit your favorite trunk.
-Jet Speed ​​Control Controls the speed of the aircraft at 314 km / h (by default, adjust the Max Jet Speed ​​slider), which makes it as manoeuvrable as possible.
-Recombiner Uses the afterburner in the controller of the speed of the jet, it allows to maintain the speed without a strong decrease.
-Max Jet Speed ​​The maximum speed control for Jet Speed ​​Control aircraft.
-Autospot Inside the game spot all players and equipment on the map, unlike 3DRadar´a and 3DSpot´a real, and brings points for helping the team.
-Autospot Delay Sets the delay between the actuation of the autospot.
-3DRadar Displaying equipment and infantry on the inside of the game radar, also if you are using a mortar or self-propelled artillery.
-3DSpot Inside the game marker of infantry or technology, appears automatically if the enemy is in sight.